In 1866, Congress created 2 Cavalry and 4 Infantry Regiments. The men of the 10th US Cavalry (and subsequently the 9th) proudly accepted the name “Buffalo Soldiers” bestowed on them by the Plains Indians. These Officers, Noncommissioned Officers, and Enlisted men were instrumental in the westward expansion of the United States, while facing prejudice, inadequate shelter, and hostile environments. They persevered in accomplishing all of their various assignments (building forts and railroads, delivering mail, guarding stage coaches, and engaging in combat) with exemplary results. Ultimately, 23 earned the Medal of Honor.

Little is written concerning the 9th and 10th US Cavalry in Colorado history. The following is a brief overview compiled by Les "Medicine Man" Dowdell, Chapter Vice-President/Historian.

FORT LYON Colorado
This post was built in 1867 and was a vital link in the early settlement of Colorado. The 10th Cavalry was stationed here and participated in campaigns in the region. 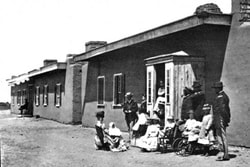 FORT GARLAND Colorado
Built in the San Luis Valley of the Territory of New Mexico in 1858, Fort Garland was home to the 9th Cavalry from 1876-1879. As the push westward continued and the need for soldiers to quell disputes and enforce treaties, the Buffalo Soldiers would establish camps/forts and ultimately, the towns of Pagosa Springs and Durango. Cathay Williams, the first African American female to enlist in the US Army (1866-1868; CO A, 38th IN) has roots in Pueblo and Trinidad, Colorado. 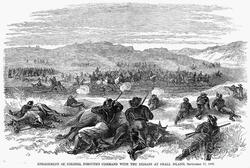 BEECHER ISLAND BATTLEFIELD
Located near the Kansas Border, this battle pitted members of various Indian tribes against a civilian scout force, led by a 10th Cavalry officer. Company H, 10th Cavalry came to their rescue after the September 17-19, 1868 conflict. 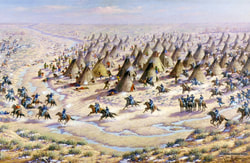 BIG SANDY CREEK
On September 15, 1868, CO I, 10th Cavalry was on patrol on the “Denver Road,” when they were attacked by about 100 Cheyenne Dog Soldiers. The battle near Aroya, Colorado, finally ended at night fall with 7 soldiers wounded, 11 Cheyenne killed and 14 wounded, and 18 horses killed or missing.

BATTLE OF MILK CREEK
In September 1879, CO D, 9th Cavalry came to the aid of the soldiers engaged in battle with the Utes near present day Meeker, Colorado. After establishing a camp near Kremmling, Colorado (Troublesome Creek) while they were scouting the area around Steamboat Springs, the soldiers rode through the night and held on until the Utes were routed.

UNION STATION Denver Colorado
Since all of their horses were killed during the Milk Creek battle, CO D, 9th Cavalry arrived by train in Denver, Colorado to a hero's welcome. They marched down 16th Street to the YMCA on Lawrence Street and enjoyed the festivities prior to being stationed in New Mexico.

This was an important emigrant and stage route. The Buffalo Soldiers were assigned to protect the Northern and Southern Smoky Hill Trail from Kansas, across the eastern plains, to Denver. The Buffalo Soldiers were patrolling the road near Cheyenne Wells, Colorado when the order was given for the rescue mission at Beecher Island. Our clubhouse is located in Bennett, Colorado. Previously named Kiowa Station, it was one of many stage stops (normally located by creeks) en route to Denver. The Southern Trail ended at the statue located at East Colfax and Broadway and the Northern Trail proceeded down 6th Avenue and ended at Larimer Street and Park Avenue. In August 1868, the Buffalo Soldiers scouted over 1,000 miles of the Kansas and Colorado prairie. Additionally, Wild Bill Hickok and Buffalo Bill Cody served as scouts for the Buffalo Soldiers out of the fort in Kansas.

COCHETOPA PASS
Ute for “Pass of the Buffalo,” is located on Highway 114 near Gunnison, Colorado. In early 1880, a family was traveling through a snowy Cochetopa Pass and their sleigh was upset. Their horses ran away and the family was left in the snowy pass with a very small chance of survival. The horses happened to sprint past a military camp near the summit. Several Buffalo Soldiers followed the trail of children's clothing and supplies back to the family and rescued them. 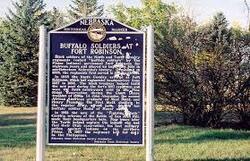 FATHER OF ARMY POLO
In the first decade of the 1900's, the masterful horsemen of the 10th Cavalry (now stationed at Fort Robinson, Nebraska) travelled throughout Colorado to compete in the polo championships. In 1905, they were the Rocky Mountain, Western, and Interstate Champions in Glenwood Springs, Colorado, and Denver, respectively. After Fort Robinson was deactivated, the bodies of 3 Buffalo Soldiers of the 9th and 10th Cavalry were relocated to Fort McPherson National Cemetery in 1947. Medal of Honor recipients SGT Emanuel Stance, CO F, 9th Cavalry and SGT George Jordan, CO K, 9th Cavalry are buried in Section F, Graves 1040 and 1131, respectively. 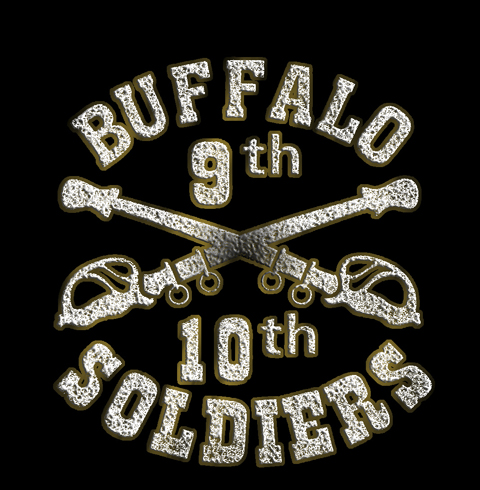